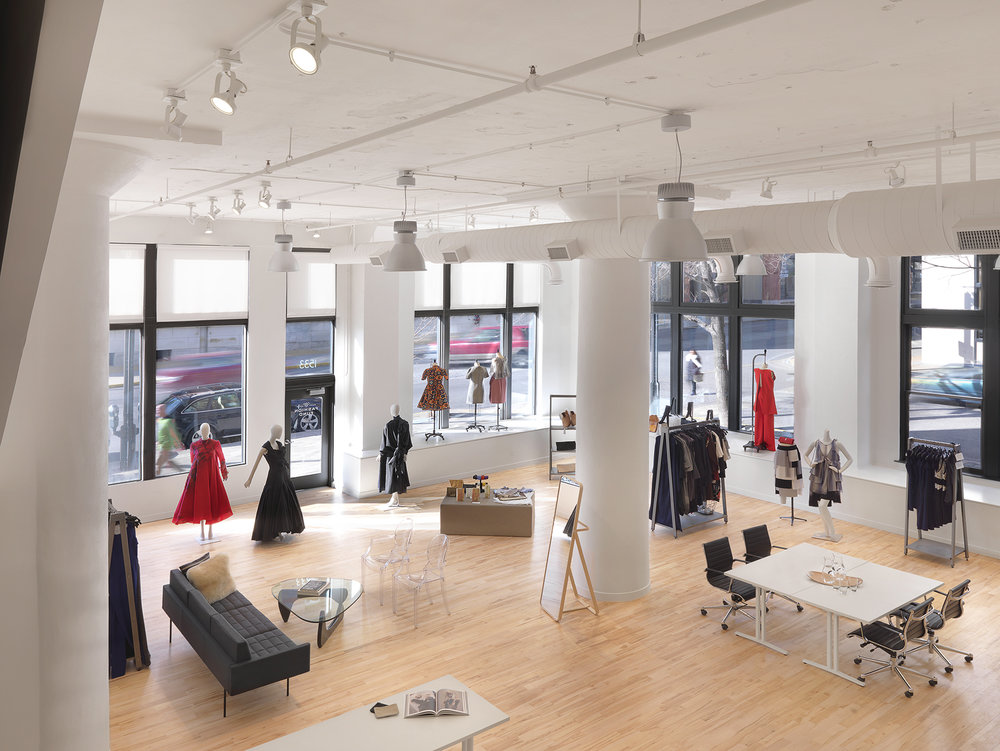 WHY REGIONAL FASHION INCUBATORS OUTSIDE OF NEW YORK AND LA MATTER

When I imagine a fashion incubator, regardless of location, I picture a bright, glossy loft with floor-to-ceiling windows and a large draft table situated in the middle. It probably sits on a high floor of a building in New York City’s Garment District — a sort of haven within an otherwise grubby neighborhood.

For many fashion incubators in well-placed cities like New York, Los Angeles, Paris and Milan, this may very well be the case. In recent years, accelerator programs have sprouted up across such fashion capital cities with increasing frequency, while less attention has been paid to those outside of them, which nurture and retain local talents and, in turn, to grow the economies of these less glamorous regions.

Fashion is, of course, a prominent business in North America that extends beyond New York or L.A. Though it’s often defined to encompass glossy fields like design, retail or editorial, there’s much more going on throughout the country and plenty of young people interested in getting into the industry. Thus, a number of fashion incubators have recently popped up in cities like Nashville, Denver, St. Louis and more.

Still, it’s not easy to get fashion incubators off the ground in areas where appetite is high, but resources are scant. Van Tucker, the founder and CEO of the Nashville Fashion Alliance (NFA) describes an industry infrastructure — ranging from fiber development to trade support to supply services to distribution — that is primarily based in New York and L.A., but could benefit from diversifying in middle America. “There’s this whole ecosystem of companies and individuals that are not brands or designers, and most of that ecosystem is in L.A. and New York,” says Tucker. “It makes it very difficult if you’re based outside to survive and thrive as an independent company.”

Despite all roadblocks, the desire is there, and so are the plethora of regional incubators to support and strengthen the fashion that’s happening at home. These expert, state-of-the-art programs in cities between coasts are giving that Garment District loft I conjured up a run for its money, but not a single program is actively looking to compete with New York or L.A. But why would they?

“They are the fashion capitals in this country and I don’t think that’s going to change anytime soon,” says Holli Gibson, co-founder and executive vice-chair of the Denver Design Incubator (DDI), a 501(c)(3) which launched about seven years ago. “Instead of saying, ‘How are we going to beat them?’ it’s more like, ‘How are we going to be ourselves and make really great products that people are going to pay attention to?'”

Still, these cities are more relevant in the fashion industry than one might think. At one point, St. Louis was the second-leading producer of fashion outside of New York, and Nashville hosts the largest per capita concentration of independent fashion companies outside of New York and L.A. And when the Toronto Fashion Incubator (TFI) was created in 1987, fashion was the second-largest industrial employer in Toronto; today, fashion remains one of the city’s leading economic contributors. “It was important to both retain and attract businesses and jobs in such a vital economic development sector,” says Executive Director Susan Langdon.

Fashion Incubator San Francisco (FiSF) was built upon the Bay Area’s background in fashion and manufacturing. As Betsy Nelson, President of the Board of Directors, explains, until the 1980s, manufacturing was the number-two revenue-producing industry in San Francisco thanks to brands like Levi’s, Gap, Esprit and Jeanne Marc. A decade later, businesses moved offshore and the industry began to dissolve, but it’s just now reemerging. Like the slow-food movement, which originated in San Francisco, many people now want to know where their clothes came from. Now, Nelson says, is “perfect timing for a fashion incubator to help emerging designers stay in San Francisco” and make their products locally.

“For people who have never been to Detroit, when they hear ‘Detroit’ all they think is bankruptcy and abandoned buildings,” says Lindsey Alexander, executive director of Detroit Garment Group (DGG), which was founded in 2012 as a response to the need for business education for Michigan’s fashion community. “My favorite thing about Detroit is that everybody is super-loyal; everybody wants to collaborate. I think having that kind of community here is very beneficial to us, but I think it could be an example to other types of areas, as well.”

Detroit is a proud city, and Alexander maintains that the DGG is all about keeping Michigan talent in Michigan; 442 miles east, at the birthplace of the U.S., Philadelphia feels similarly. As the national retail sphere continues along its downward spiral, Michelle Shannon, a founding board member of the Philadelphia Fashion Incubator(PFI), has cause to believe that smaller regional boutiques will become more essential to brick-and-mortar play. Which, of course, leads us to millennials, who are as top of mind as ever. “The millennial consumer wants to feel connected to the merchandise they buy and the idea of local is important to them,” says Shannon.

Is fashion consumption truly becoming as localized as smaller-city incubators are claiming? That’s not exactly been proven, but local production, obviously, benefits local economies.”Designers make a huge contribution to our local and regional economy by stimulating job creation and retention,” says Langdon. “Not only do they hire sample-makers, pattern-makers, contractors and graders; they also hire models, stylists, photographers, videographers, graphic designers, printers, service technicians for the sewing machines, sales agents, bookkeepers and more. Plus, they rent studio or retail space; purchase textiles from local suppliers and agents, packaging materials, hard paper and industry supplies; buy sewing equipment, rolling racks, showroom hangers and visual merchandising materials. Think about all of those people involved in all of those jobs; many with nontransferable skills, and you’ll quickly realize how important it is to ensure the vitality of our fashion industry.”

To revitalize a local fashion industry is to revitalize a local economy. Chicago, for one, has taken this to heart since the city launched fashion initiative Fashion Focus Chicago in 2005; the Chicago Fashion Incubator (CFI) came three years later. “Then-Mayor Daley recognized the wide reach of Chicago’s fashion industry, the significant impact fashion has on the local economy, the need to support and retain creative talent coming off acclaimed fashion programs and the emerging and established fashion brands rooted throughout Chicago’s neighborhoods,” says Tonya Gross, the CFI’s executive director.

Johnson is one state over, in Missouri, where he tells me that St. Louis is a cultural hub in its own right, but in no way does it rival New York, L.A. or even Chicago, Nashville or Philadelphia. He explains that for the SLFI’s designers, this is to their advantage. “There’s a handful of great things to do so that they still have that creative sort of inspiration that they need, but they’re also able to concentrate on their businesses,” he says. “That’s very important as an entrepreneur. That signal to noise ratio is a little bit in favor of signal versus noise.”

By touting a high quality of life and business-friendly communities, these cost-effective locales are making real plays to attract fashion industry talent from both coasts. Johnson himself had been in New York for close to nine years, most recently as the New York City Economic Development Corporation’s “fashion czar.”

Tucker, a native Nashvillian, compares this temptation to a movement that occurred within Nashville’s music industry in the 1980s and 1990s, at which time most of the industry’s infrastructure was in New York and L.A. “We had this creative concentration of writers and artists and producers and musicians here in Nashville, and there were a group of leaders who said, ‘I don’t want to live in New York and L.A. It’s expensive; it’s not my vibe,'” she says. “So they built this infrastructure here, and now we’re the largest center of employment in the world in the music industry.”

The same is true for these incubators, for which industry leaders from either coast lend their expertise. In St. Louis, the name recognition is as powerful as the facilities are impressive. Its six designers receive mentorship from a diverse host of names, including Timo Weiland, Fern Mallis, Derek Blasberg and Christene Barberich, as well as Saks Fifth Avenue’s Roopal Patel, Swarovki’s Tara Levy and Savannah College of Art and Design’s Michael Fink. It has the digs to match, with a 7,500-square-foot, light-filled building in the city’s historic Garment District.

We’re all suckers for airy spaces and natural light, but it’s the tools these programs offer its participating designers that are their greatest selling point. Back in Denver, the DDI provides shared work spaces and a comprehensive sourcing library that’s available to the public with purchase of a library card. Here, members can look for fabric, trim and button suppliers, all of which are geared to work with smaller manufacturers and designers. Others, like the FiSF in San Francisco, are more focused on individualized business services, ranging from developing financial plans to branding and marketing.

Like any startup, it took years for these incubators to get themselves to a place where they could even afford a space, let alone construct an entire resource library. Many are nonprofit organizations that began with precisely zero capital and, somewhat cyclically, lacked the publicity needed to gain any sort of funding. Incubators in Denver and Detroit turned to crowdfunding, the latter of which allotted donation markers — $500 will provide a sewing machine, etc. —  to demonstrate what, exactly, was being supplied. Others combined self-funding with corporate sponsors, like Meijer in Detroit and Ralph’s Industrial Sewing in Denver; CFI, FiSF and PFI were created with assistance from Macy’s.

“As a new organization, getting the word out that we exist just takes time,” says Johnson. In those early days, he found it difficult to “develop a reputation for excellence” quickly.

At the SLFI, Johnson tells me it’s the business — not design — side of things that causes companies the most grief when starting out. For all young designers and the incubators who host them, cash is king. “It was often the story that emerging designers, if they have one season that doesn’t get picked up or there’s a production issue or there’s just a turnover within their company, they can be out of business,” he says. “These are all often well-capitalized businesses to begin with, so their margin for error is incredibly small.”

Back in Chicago, Gross discusses how the biggest struggle among local fashion businesses is the the lack of immediate resources, from funding to production capabilities, that allow them to grow. Unfortunately, for a brand to get publicity, to showcase its talent, it needs funding — but to get funding, a brand needs publicity.

One solution to the resource desert, Gross suggests, is to create a pipeline to global platforms such as fashion weeks and trade shows in other fashion cities. “Who would like to join us in creating a roadshow in the U.S. to L.A., NYC, Nashville, Austin, Portland, Detroit, Miami, Milwaukee and Chicago? And beyond? We don’t think of other fashion cities as our competition. Not competition, collaboration — between American-based makers and organizations. It’s a call to action.”

It’s 471 miles from Chicago to Nashville, where Tucker, too, is planning the local community’s next move. “You can’t do this on an island. You have the support of the industry within your city and I don’t want to make that sound simple, because that’s not easy,” she says. “Just like eating an elephant. You do that one bite at a time.”